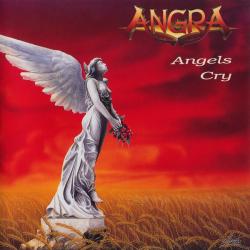 Brazilian metal band formed in 1991 by Santa Marcelina Music College students vocalist Andre Matos and guitarists Rafael Bittencourt and André Linhares. They were joined by Bittencourt's former band mate Marcos Antunes (drums) and bassist Luís Mariutti (ex-Firebox). This line-up composed a number of the earliest songs, with Rafael Bittencourt and Andre Matos emerging as the main songwriters. Two of the first songs written were 'Time' and 'Angels Cry', which both featured on the band's first album.

'Angels Cry', the band's debut album, was released on 3 November 1993. Producer Charlie Bauerfeind was not confident that drummer and co-founder Marcos Antunes would be skillful enough for the music he expected to put in the album, so he told the band they could either fire him and hire Alex Holzwarth as a session musician or use electronic drums - or otherwise he would leave the project. The band decided to do as he said and replaced Antunes with Holzwarth, a decision Matos regards as being very difficult. One of the songs, however, was performed by a different drummer: the Kate Bush cover Wuthering Heights, played by then Gamma Ray drummer Thomas Nack. Matos said Nack was a big fan of Bush and "could play those lines perfectly".

Two more albums followed: 'Holy land' (1996) and 'Fireworks' (1998). Angry broke up in 2000, parting ways with vocalist Andre Matos who took bassist Luis Mariutti and drummer Ricardo Confessori with him. Remaining members Kiko Loureiro and Rafael Bittencourt announced a new line-up the next year, with new vocalist Eduardo Falaschi, releasing the album 'Rebirth' quickly. 'Temple Of Shadows' followed in 2004, and 'Aurora Consurgens' in 2006. The band took a break and returned in 2010 with the album 'Aqua'. After this album, Falaschi announced his departure from the band. He was replaced by new member Fabio Lione, with whom they released 'Secret Garden' in 2014. In 2018, they release the album 'Omni'.