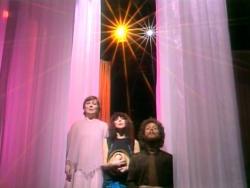 Screenshot from the Christmas special 'Kate'

Short song, apparently written by Kate, performed on the Christmas special Kate as an introduction for Peter Gabriel by Paddy Bush, Glenys Groves and Kate Bush. It was originally broadcast on 28 December 1979. While it was never officially released, the song appears on many bootleg cd's and dvd's.