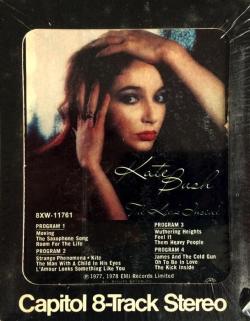 The Kick Inside (8-track cartridge) 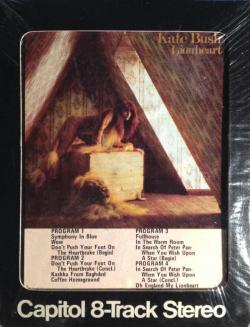 The 8-track cartridge, also known as 8-track tape or 8-track, is a magnetic tape sound-recording technology that was popular in the United States from the mid-1960s to the early 1980s, when the Compact Cassette format took over. The format is regarded as an obsolete technology, and was relatively unknown outside the United States, the United Kingdom, Canada, New Zealand, Australia, West Germany and Japan.

The original format for magnetic tape sound reproduction was the reel-to-reel tape recorder, first available in the United States in the late 1940s, but too expensive and bulky to be practical for amateur home use until well into the 1950s. To eliminate the nuisance of tape-threading, various manufacturers introduced cartridges that held the tape inside a metal or plastic housing to eliminate handling. Most were intended only for low-fidelity voice recording in dictation machines. The first tape cartridge designed for general consumer use, including music reproduction, was the Sound Tape or Magazine Loading Tape Cartridge (RCA tape cartridge), introduced in 1958 by RCA. Prerecorded stereophonic music cartridges were available, and blank cartridges could be used to make recordings at home, but the format failed to gain popularity.

The popularity of both four-track and eight-track cartridges grew from the booming automobile industry. In September 1965, the Ford Motor Company introduced factory-installed and dealer-installed eight-track tape players as an option on three of its 1966 models (the sporty Mustang, Thunderbird, and the luxurious high-end Lincoln), and RCA Victor introduced 175 Stereo-8 Cartridges from its RCA Victor and RCA Camden labels of recording artists catalogs. Most of the initial factory installations were separate players from the radio, but dashboard mounted 8-track units were offered in combination with an AM radio, as well as with AM/FM receivers.

With the backing of the U.S. automakers, the eight-track format quickly won out over the four-track format, with Muntz abandoning it completely by late 1970. With the availability of cartridge systems for the home, consumers started thinking of eight-tracks as a viable alternative to 33 rpm album style vinyl records, not only as a convenience for the car. Within a year, prerecorded releases on the eight-track tape format began to arrive within a month of the vinyl release. The eight-track format became by far the most popular and offered the largest music library of all the tape systems.

Eight-track players became less common in homes and vehicles in the late 1970s. The compact cassette arrived in 1962, and by the late 1970s the eight-track cartridges had greatly diminished in popularity. In some Latin American countries as well as European, the format was abandoned in the mid-1970s in favor of the smaller cassette tape which was one-third the size.